Darlington Farmers Auction Mart held their Christmas Show and Sale of Prime Cattle in conjunction with their weekly sale of Prime Stock on Wednesday 24th and Thursday 25th November 2021. Forward were 221 Cattle, 2421 Sheep and 15 Pigs.

With the new and improved arrangements the inaugural Wednesday evening show of clean cattle was combined with a Christmas Shopping Fayre and Charity (RABI) Carol Service, the show of bulls and also the sale of all cattle then took place on Thursday under the normal ‘red market’ rules.

A superb effort from all our supporters enabled us to raise over £1300 for RABI which will be added to their own impressive fund raising on the Wednesday. The event was a great success and attracted a gigantic crowd which not even the most optimistic of us here at DFAM could quite frankly have dreamed of, following the depressing Covid restricted start to life here at Humbleton Park the company and staff feel immensely blessed and humbled to have finally witnessed our mart at it’s best, uniting the community, showcasing the best livestock and most importantly providing the unique atmosphere and camaraderie that only a bustling mart can do.

Show Cattle
A very high quality 48 clean cattle were presented before our judge Mr Stephen Linsley of S K & A J Linsley Butchers, Shildon; we sincerely thank Stephen, brother Andrew and son Joe for making a thorough and professional job throughout. We thank every vendor who made considerable effort to partake in this event and put forward such a wonderful exhibition, the sponsors are as always invaluable to the success of these flagship shows, with the brilliant generosity of no less than fourteen supporting businesses we were delighted to offer a cattle prize fund close to £1500 with more superb funds up for grabs from the same generous sponsors at our sheep show on December 9th.

With nine incredibly high quality classes to deliberate upon the judges duties on Wednesday evening were both enviable yet challenging at the same time, a perfect mix of immaculately presented beast hailed from all across the UK, in reality, several of the marvellous cattle presented could easily have taken the Championship sash, as is always the case however in the show ring only one can claim the 2021 title of Christmas Champion. The successor and winner of the much coveted Stephen Aitken memorial trophy was a fabulous Limousin crossed steer from the heavyweight class produced by Georgina Laws, High Village Farm, Hauxwell; purchased privately from the renowned breeder Alan Smith-Jackson, Haydon Bridge and sired by stock bull Hightown Jacko the wonderfully produced bullock is absolutely stacked with style, full of loin and the perfect shape for a modern butchers counter, despite the outstanding level of competition the steer was in our judges eyes ‘faultless’ and absolutely ‘full of meat from head to toe’. Reserve Champion and also best opposite sex went across the Pennines to one of our regular Cumbrian raiders Alan Barnett of Brinns Farm, Shap with his winner of the heavyweight Limousin heifer class; an incredible butchers heifer the wonderful example put another feather in the Northumberland breeders caps as she started life just a few miles away from our Champion at East Unthank Farm, Haltwhistle. Our third trophy presented was the Ben Craggs Memorial for the best homebred beast hailing from Durham or a neighbouring county and it duly brought about a ‘clean up’ for the Limousin breed, the winner this year came from regular contenders Jim and Heather Marks of Gilly Flatts, Bishopton with an absolutely superb heifer sired by their prolific stock bull Bassingbourn Malcolm. Magnificent beast from near and far were enjoyed by a monumental crowd, no silverware to polish this year yet very successful days were also enjoyed by last year’s victor Frank Page, Northamptonshire, the Renton Family of Morpeth and a strong challenge also came from Messrs Hall of Ainstable Hall, Carlisle.

The prime bull show on Thursday morning was expertly judged by Miles Worsley of Worsley Wholesale, Briestfield who was offered some super bulls to place, the outstanding results for Limousin cattle continued as our winning continental bull also carried the Lim lettering upon his passport, a tremendous bull from J J Kemp & Son, Elstob Hill Farm, Stillington fought off some very stiff competition. Congratulations also go to the winners of the Friesian bull class, week in week out few surpass the brilliant feeding of R Hall & Son, Kilton Hall, Brotton and they were again at the front of the pack.

Full show results are listed below, we would also like to take this opportunity to thank all buyers and underbidders, mart staff and hauliers without whom these memorable occasions would not be possible.

Prime Bulls (80) – The blistering bull trade went forward again, the phenomenal returns seem to keep on increasing week in week out, today’s sale average soared to a sublime 253 pence per kilo, the show bulls did not have things all their own way as we burst the 300 pence barrier even aside from those kept for this occasion. Whilst our 1st prize bull from J J Kemp & Son, Stillington led the way at 320ppk other great bulls in the shape of our 3rd prize winner from G K, K N & G J Hird, Richmond and a superstar from A G Watson & Sons, Rushyford also sold beyond 300 pence, all 3 bulls in the 300 club were Limousin’s weighing between 725 and 750kg. Seven further bulls followed in the 290’s as a frenzied trade was without doubt one of the best we have ever witnessed. The gross value’s this week are to be seen to be believed, twenty bulls sold for £2000 and beyond, of those six sold in the £2100’s, three in the £2200’s, our 1st prize winner at £2400 was however remarkably muscled out of the top gross value by some margin; step forward K & A Harker of Worsall Grove Farm with an unbelievable 871kg Limousin which sold for 296ppk and a massive £2578. The more commercial bulls achieved the impossible and possibly lifted more than the super selling best bulls, the high flying Holstein Friesian’s averaged an almost ridiculous £1400 and 214 pence per kilo, kings of the black and white brigade were the terrific feeders R Hall & Son, Kilton Hall Farm, Brotton selling to 236ppk and £1555. Below are a select few of the insane returns we had the pleasure of seeing today.

Prime Clean Cattle (139) – As could be expected with the show cattle involved this week some absolutely immense averages are here to report, the heifers levelled up at 292ppk and the steers 276ppk; not just those however showing can afford to do the crowing as all weights, shapes and sizes were once again were in unbelievable demand. The top two beast in the show naturally took the spoils with our Champion from Georgina Laws the highest gross valued steer and highest per kilo whilst our Reserve Champion from Alan Barnett the highest gross valued heifer and top price per kilo on the day. The top averages listed below are naturally dominated by the show cattle; aside from those fresh from the judging ring mention should go to W J Scott Ltd, Low Leam who sold steers to £1934, A C Simpson & Son, McNeil Farm sold heifers to £1952, R S Hall & Sons, Ivy House sold steers to 277ppk and the ever consistent J V & J A Hodgson & Son, The Grange sold heifers to 319ppk and led the commercial cattle averages with 10 levelling at 306ppk and £1736.

Cast Ewes & Rams (427) – With the majority of the nations ewes busily looking for love at this time of year the trade is always expected to lift, currently it is not disappointing as the prices keep nudging that bit higher week by week. A plain show of quality averaged a very healthy £92. Top price came from P J & M P Gilhespy of Ponteland with a quality pen of eight Texel ewes, heavy Mule ewes regularly sold £110 to £125 with a top of £129 from R Lawson & Son, Home Farm and Swaledales sold as high as £75 from W R Barron, The Deans.

Prime Pigs (15) – Trade took a turn for the worse. It seems very harsh on the vendors as the cattle and sheep trades thrive and yet our porky pals are really suffering, act now, get behind them and treat yourself to a pigs in blanket binge throughout December. 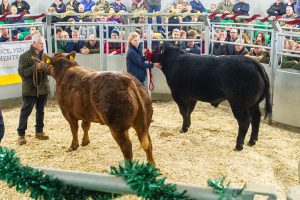 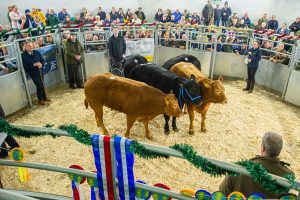 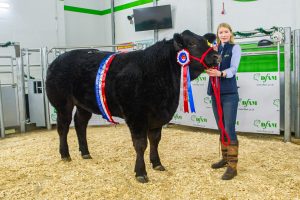 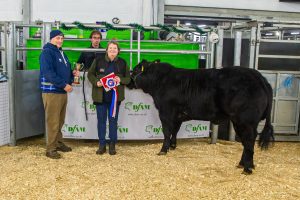